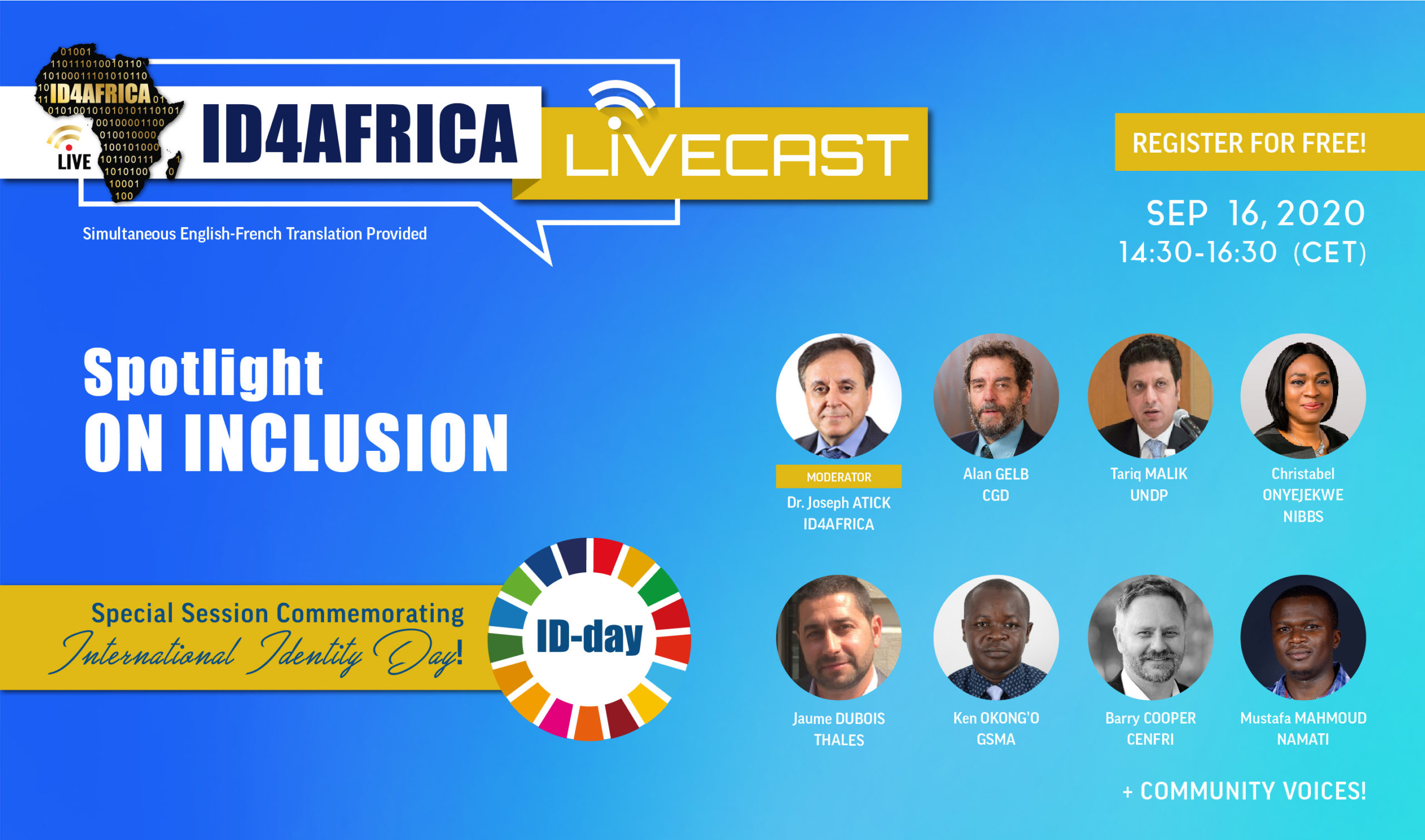 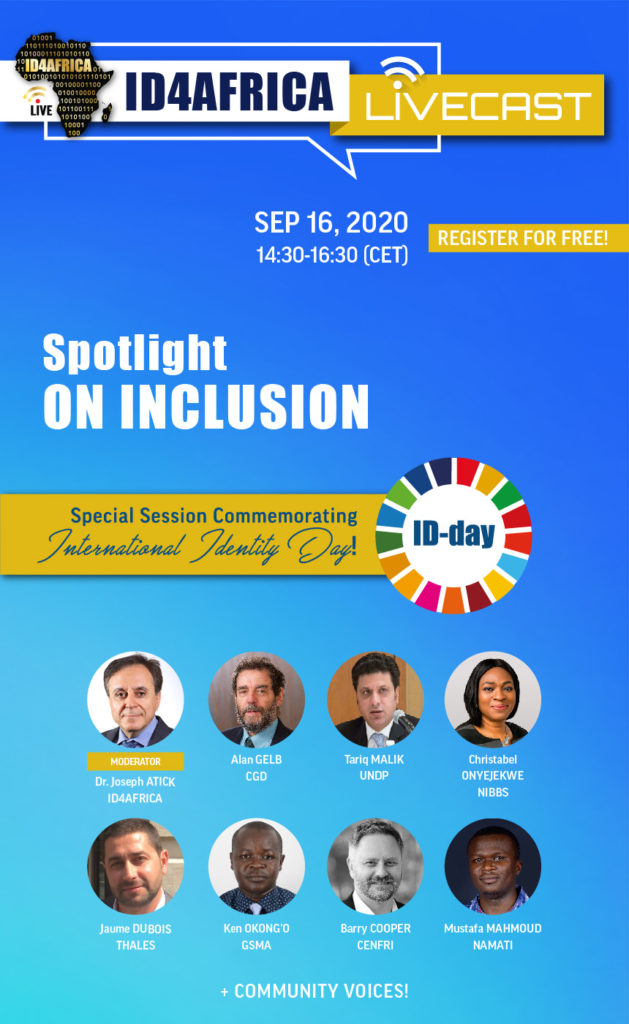 We believe the greatest challenge for identity in Africa right now is achieving inclusion – getting everyone enrolled and onboarded into an identity system, so that they are visible and can receive their fair share of benefits and services. This goal has become even more urgent in the aftermath of the COVID-19 pandemic as the public health challenges and economic woes are pressuring governments to deploy social safety nets, health, and labor programs to contain the pandemic and help restart their economies—all requiring inclusive identification of the population.

The objective of this LiveCast is to provide concrete guidance to governments about policies, approaches and technologies that have been proven successful in boosting enrollments or are promising game-changers in that regard.

Join us on International Identity Day 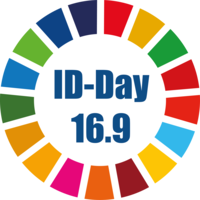 To celebrate International Identity Day, this episode of the LiveCast was an extended session of 2 hours to allow panelists to dive deeper into the subject and to give attendees the opportunity to voice their opinions, through the Community Voices feature, on the number one challenge for identity systems today.

Inclusion, the biggest obstacle to the Identity Movement, need to be addressed now!

What makes this subject complex is the fact that there is not one single reason why people continue to be excluded. In fact, even when people are not excluded from ID systems, they could be excluded from services because of a variety of ID-related issues like authentication failures, difficult KYC or unrealistic eligibility standards, etc.

In addition, the impact of ID exclusion can manifest itself differently in varied sectors of society, and could possibly be entangled with deeper cultural and societal challenges. For example, those affecting women, marginalized groups, minorities, the poor, the nomads, the remotely inaccessible, and those that lack documentation from birth. 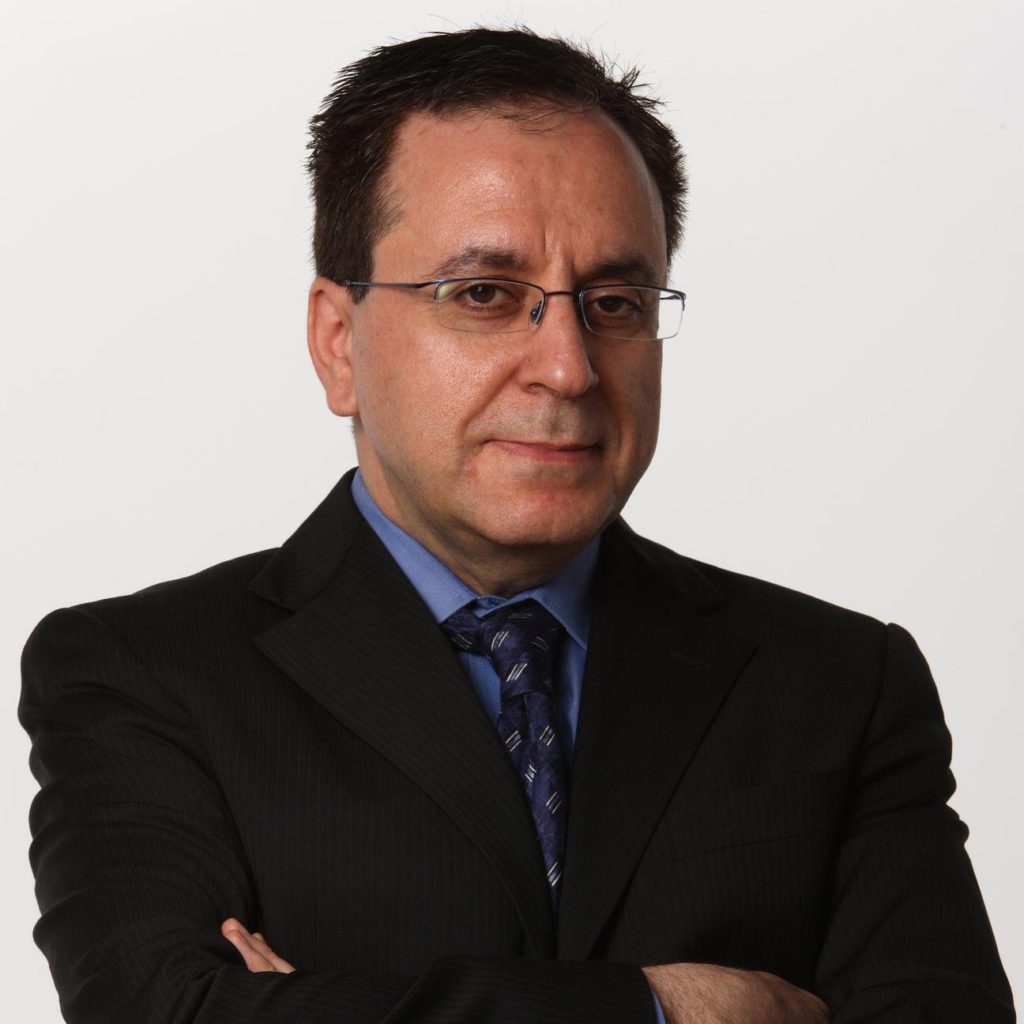 Tariq Malik, Chief Technical Advisor, (UNDP), is the former Chairman of the National Database and Registration Authority (NADRA) in Pakistan. Prior to joining UNDP, he held the position of a Senior Technical Consultant at World Bank. Tariq is among the ten core members of technical experts’ group (TEG) of World Bank supporting client countries with ID planning and implementation. His name was included in the World’s 100 Most Influential People in ‘Digital Government’ by a European think tank known as Apolitical. He was also named among the Top 100 Digital Influencers in the ‘Digital Community’ by One World Identity (OWI)- a New York based independent identity research and strategy think tank focused on cyber security, digital commerce and risk management. Before joining World Bank, Malik helped governments to optimize use of Big Data and advanced data analytics from the platform of Teradata Corporation, USA.

As CTA, UNDP-Malawi, Malik spearheaded a team of development partners, 4500 Registration Officers and achieved universal registration of adult citizens -SDG 16 target 9 for Malawi within 180 days. Before that, he pioneered some key innovative digital governance interventions for Pakistan as Chairman, National Database & Registration Authority (NADRA). He spearheaded one of the world’s largest multi-biometric system roll-out resulting in registration of more than 121 million citizens along with their associated biometric attributes. Using digital ID, and innovative technologies he developed social protection programs to empower women, protect internally displaced persons, combat tax evasion and corruption, strengthen democracy and reduce poverty in Pakistan. Tariq led similar projects in Kenya, Nigeria, Tanzania, Somalia, Sri Lanka, Bahrain, Bangladesh, and Malawi. He helped various institutions of UN (UNHCR, ICAO, UNDP) and World Bank to accomplish goals with transparency. Prior to that he served as Deputy CIO in Wayne County, State of Michigan, where he led design, development, and implementation of an online Property Tax System.

Throughout his over 20-year career, Tariq has helped governments improve service delivery using innovative technologies. Result-based achievements earned him various national and international awards. The State of Pakistan conferred the highest award in Technology (Sitara-i-Imtiaz) – the ‘Star of Excellence’ – to Tariq in 2013 for using technology to improve governance. Tariq won Teradata’s 2012 National ‘CIO of the Year’ award and, prior to that, he was recognized at the 2009 ID World International Congress in Italy as the recipient of the ‘Outstanding Achievement Award’ for his work as an international biometrics leader. Tariq holds Masters’ Degrees in both International Management (Heidelberg, Germany) and Computer Science. His Bachelor’s Degree is in Mathematics & Statistics. He had been trained in JFK School of Government, Harvard University and Stanford University, USA as well, where he received executive education. Tariq is married and lives with his wife, three daughters and a son in Farmington Hills, MI, USA.

Christabel ONYEJEKWE is the Executive Director for Business Development at Nigeria Inter-Bank Settlement System (NIBSS) Plc. Prior to this role, she served as Executive Director, Technology & Operations where she handled several strategies for businesses, projects and new payment products & solutions for NIBSS and the Industry. With over 25 years cognate banking and broad executive management experience, she is a proven change and result-oriented professional with strong business drive and leadership qualities. Christabel holds a Bachelor of Law degree and an MBA; she is an Honorary Member of the Chartered Institute of Bankers of Nigeria (CIBN) and an alumnus of: Lagos Business School (LBS), the renowned INSEAD Business school, Wharton Business School, Harvard Business School and MIT Boston, USA.

Jaume Dubois is an identity solutions specialist, in charge of definition of Unique Identity and Identity Management solutions at Thales, a leader notably in Identity, Biometrics and Security. He has strong field experience in directing large identity system programs for government such as ID cards, Health cards, electronic Passports, or Border Control systems in Latin American and African countries, which has made him a specialist of complex solutions in the Biometrics and Identity field.

Ken OKONG’O is the Policy and Advocacy Manager, Mobile for Development in GSMA. Through research, he develops policy positions and directs advocacy efforts in the domestic and international fora, focusing on Digital Identity and Mobile for Humanitarian Innovation. He has previously worked in public and private sectors within the broader ICT4D space, including in mobile service provision and regulation in Africa and Asia. He holds an MSc in ICT Policy and a PhD in Information Systems from University of Cape Town, South Africa.

Barry COOPER is a Technical Director at CENFRI. He is a legal advisor and banking expert, specializing in financial inclusion and regulation, biometrics and identity, innovation market analysis, financial sector policy and regulatory strategy for development, and supporting governments on making markets work for the poor. He is currently leading training of FSPs, DNFBPs and regulators in selected Eastern and Southern African countries on the above.

Mustafa MAHMOUD is the Senior Program and Advocacy Officer for Namati’s Citizenship Program. He has seven years’ experience supporting partner organizations working with community-based paralegals on Citizenship issues in Kenya, Bangladesh, Jordan, and Myanmar. Before joining Namati, he was the Program Manager at the Nubian Rights Forum, a Kenyan NGO, where he managed a team of seven paralegals assisting the Nubian ethnic minority in applying for citizenship documents. He is currently pursuing a degree in Development Studies at the University of Eastern Africa Baraton, Nairobi. 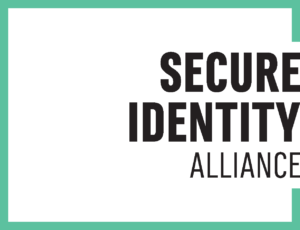